I was really curious about Postpartum Binding this time. 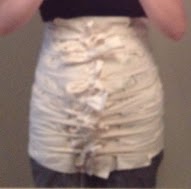 I don't really know why I was so curious... I was way less concerned about postpartum appearances this time.  I think it was just because I was really curious about all things pregnancy.

While pregnant I tried to do research on the subject.
And you know what?
Its really hard to do.
There isn't a lot out there.

Mainly what I came across was the idea that its been done for centuries, in many cultures, in many variations. (Belly Bandit's site does a good job of citing these practices. But be warned, they are selling their product in the midst.)

So the fact its been around so long, and across so much of the globe made me think there is probably something to it.
Ancient natural wisdom.
(But then again, there are some ancient practices that are just plain crazy. So...)

The general idea is that binding the belly can help the uterus shrink back down, help the flush out postpartum blood, and give some added support during recovery.

I asked the two gurus of my latest pregnancy (my midwife and my prenatal chiropractor) their thoughts on belly binding. And I got two different answers.

---After my first was born via c-section, the hospital gave me an abdominal binder to help aid in recovery.
I thought it felt awesome the first time they strapped it on me. (I was standing up) Because I all of a sudden felt stronger, and more able to stand. (After having your abdomen operated on, it feels kinda scary to stand up fully, even if its totally safe to do.) So I really liked wearing it while I walked the hallways. (Walking is a big must post-op.)
But I basically hated the thing if I wasn't standing.
I refused to wear it while sitting because it would kinda bend and fold, and end up wedging itself into my incision. I tried wearing it again later on once my incision was more healed, and I still hated it. So I just wore it on walks for the first week or so. And then it collected dust.

---After my second was born, I was kinda doing an experiment (an unscientific one) to see what the binding fuss was about.
I thought briefly about getting the Belly Bandit (the big brand in Postpartum Binding now a days.) But after reading reviews I decided not to. Mainly because its expensive! AND it seemed like everyone ended up having to buy two sizes as they "unpregnified." (Even more expensive!)
But I also read a lot of women talking about how stiff it is, and yet how it still kind rolls up and misshapens.

So instead, first I tried using an 6 inch wide ace bandage that I would wrap up in. I tried that for about two days. While standing that felt good. But once I sat down it rolled up and basically totally undid itself in about 30 mins. (No matter which way I tried to wrap myself.)

Then it dawned on me that I have that old hospital issued binder, so I pulled it out.
I actually found it to stay put much better this time than last. (I can't tell you if that was based on the fact I was smaller, overall, this time than last. Or if it was just the difference between my c-section shaped belly and my VBAC shaped belly. Or if I was just less aware of how it sat on my body because I didn't have an incision for it to dig into. Really, it could be all of the above.)
And yep. Just like last time, I loved the feeling of it the first time I strapped it on.
Instantly stronger and more upright.
And this time I could wear it sitting down, which also felt great.

As I've mentioned in other posts, after my c-section, I wrongly assumed there was an instant recovery from vaginal birth. After my VBAC, I was really surprised at how fatigued my abdomen was. Of course it makes sense, it just did a major muscle workout --- contracting for hours to press a baby down and out. But I guess last time I figured my belly was just sore from surgery, not giving any credit to all those contractions I had before hand.

So I found having the binder on to be a really nice support while my muscles took a breather after birth. I felt like it helped me to sit upright, instead of totally hunched over.
And both in the physical (literal way), but also very much in the emotional way, I felt that it just made me feel more pulled together.
Postpartum's hormonal crash, can feel very emotional. And I think there is something to being held tight when you are emotional. Ideally held tight in a hug's embrace, but just having something tight around you can help. Its nice to have a continual embrace in the early days. So, I think, emotional support might be one of the ancient reasons behind binding. (But that's just my theory.)

I wore my hospital binder a lot during the first maybe three weeks, and on and off again a tiny bit later on.

I will say the longer out I was from birth, the less I liked wearing it. It didn't feel helpful anymore. I was kinda just trying it to see what it might do as far as getting me back in my pants.

Edit in 3/4/15: I am now in my third pregnancy and I have noticed that I have diastasis recti, which is the separation of the abdominal muscles -- something that is not uncommon in pregnancy. Having begun to look into this for my future recovery, I came across this very helpful video explanation  (found on this page) on why binding (they refer to as splinting) can be helpful while healing your transverse abdominis, in the beginning, as one part of the overall recovery process.
As far as how to recover: I have been reading GREAT things about a recovery program for mothers call MuTu (which stands for Mummy Tummy, if you are wondering) which helps to lose the baby weight, improve pelvic floor function, strengthen your core (regardless of if you have a diastasis recti or not --- after pregnancy you need to strengthen your core again) and get strong, fit and truly body confident. And it’s all done in a very do-able mom-able time table. The initial workouts are only 15 mins long (good for fitting in at nap times) and the more advanced workouts later on are just 20 - 25 minutes. I’m pretty sure I will be looking into this program for myself, and if I do I will blog about it later on when I can speak of the results -- for now you can look around the web and see mommas sharing their stories.

As far as the stuff out there about belly binding being the key to getting your figure come back and such....
Everyone's going to have their own experience to speak of,
But honestly, I don't think it does too much.

Your uterus shrinks close to pre-pregnant size by 4 weeks, and by 6 to 8 weeks it should be its old size again. But after your uterus shrinks back into your pelvis, women tend to look somewhat pregnant for a while longer. That's because your abdominal muscles get stretched out during pregnancy, and it will take time – and regular exercise – to get your belly back in shape. A binder is just pressing your belly inward, its not training your muscles. In fact its taking some of the work away from your muscles. (Which is why my chiropractor didn't want you wearing it very long, and my midwife doesn't even suggest it.) You will need to train your muscles while wearing a binder (or splint) and afterwards to be able to support your midsection on it’s own again.

And the gorgeous women in the "actual customer" photos on their sight...I think she's just one of those lucky, lucky, gosh-darn-lucky women who bounce back in two seconds regardless of the belly bandit. You can tell she started her pregnancy very fit, and remained so throughout, so that I'm sure was more what got her to the end point, than any product. (Plus we all should know better than to trust photos now a days. I'm not saying she was photoshopped, but you never know.)

So in my opinion of belly binding in general (taking into account research, valued opinions of experienced women, and my two experiences):
I think it feels great at first, and can be helpful initially. But is not worth spending tons of money on.

I'm a fan of my hospital grade binder:
I think its very comfortable. It stayed put for me really well this time. It has nice stretch to it, so it feels like you have it at the right size whether standing or sitting. Its easy to put on, and will fit through the endless size shifts, because you can just keep tightening it.
AND the best part, its cheap!
I bet you could just ask for one at the hospital (regardless of birthing method) and get it for free (well as "free" as a stay at the hospital is to you.)
And if not, you can buy one online for around $15.

Mine was a MediChoice Abdominal Binder - 9" wide, made up of 3 Panels. Mine's the the bigger size: 46" to 62". Which was much too big this time, but I just wrapped it overlapping, around itself, until it was tight. That worked fine. (And maybe the extra wrapping helped it stay put better this time?) So I don't think you need to stress over exact sizing. Just made sure it will wrap at least once. 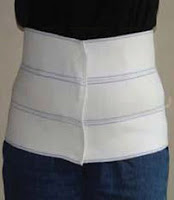 If you are wanting one, you can click the link above to find a site that sells them. But, really, I think any stretchy hospital type binder you can find online would suffice.

And if you are ambitious (and not overly concerned with stretchy comfort) you can just use a long piece of fabric and wrap away.
I didn't try this personally. It looks like the last thing I want to have on right after having a baby. But its very traditional, and its cool to see.

And you can see my post on Postpartum Hip Binding here!!

Email ThisBlogThis!Share to TwitterShare to FacebookShare to Pinterest
Posted in: Healthy Pregnancy, post-pregnancy