Seeing a Chiropractor During Pregnancy

I moved to a new state halfway through my second pregnancy.  With my first I needed a c-section so finding a provider who would be supportive of a VBAC was tops on my list when interviewing providers.  During a long question-and-answer session I had upon meeting the provider whom I ultimately chose, I was referred to a chiropractor.  The referral came across as really more of a "must."  Not that I had to, but that it would basically be silly not to. 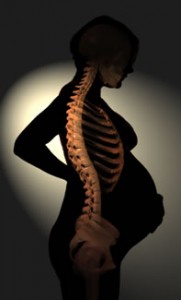 Lets be honest, I'm really giving my all towards achieving a VBAC.  So I didn't need a whole lot of convincing.  But what really sealed the deal on my decision was this:

During our talk, I of course shared my previous birth story (induction, followed by a c-section, due to malposition, after 2 hours of pushing), but didn't mention that every time my cervix was checked, the previous midwives would always tell me my daughter was "floating."  While talking things through, I shared that I was very concerned with the idea that I would be able to go into labor this time, as last time I went to 42 weeks and was then induced.  This care provider's immediate response was, "Well I think you never went into labor last time because of your daughter's position.  I think she was always in a poor position, keeping her from pressing down on your cervix, which is what gets labor started.  If you were to see a chiropractor this time, I think we would avoid that altogether."
You could have knocked me over with a feather!
First of all, I was more than impressed with her knowing that about my daughter's position without my saying so.  (I was ready to commit to her care right there and then.)
Second of all, I was more than un-impressed with my last group for not mentioning the help a chiropractor could have been to me, or even intimating that I should really be trying to get my baby to press down on my cervix to get labor going.
And third of all, after hearing that I was ready to drive to the chiropractor that very instant!  (There is nothing I'd like more than to go into labor on my own this time!  Seeing as how if I don't it means an automatic c-section for me, I was definitely going to give this a try!)

I was also told that seeing a chiropractor has been known to not only take away pregnancy aches and pains, but decrease labor and pushing times.
I was introduced to a mother, there in the office, who had dramatically different results in her last pregnancy compared to that of her first two.  She said her "normal" hip pain was non existent this time, and her labor was half as long as usual, with only a few minutes of pushing this time as compared to a couple hours for her previous births!

Like I said, I was already sold before, but... after hearing that, nothing was stopping me!

It's not a common recommendation given by many prenatal providers out there, so you may be as unfamiliar with it as I once was.  And honestly, it's a tragedy that this information isn't shared more frequently, because it could change so many womens' experiences.  I just don't think many providers even realize it is an option, and that there are so many great benefits to be had.
So of course I wanted to share it here on my blog in hopes that maybe one more person would have the awesome benefits that come from seeing a chiropractor in pregnancy. 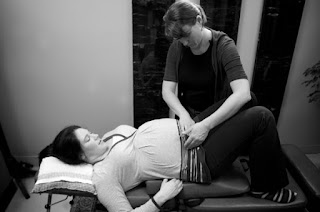 So here is a bit of information I dug up for you, if you'd still like a bit more on the subject:

Basic Benefits for the Mother

Basic Benefits for the Infant 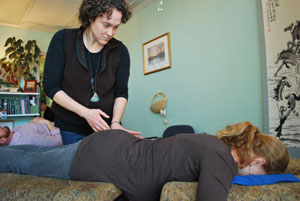 
Chiropractic care prior to conception promotes fertility.  For women it can provide a more regular menstrual cycle and optimal uterine function.  It also prepares the body to be strong, supple, and as balanced as possible to carry the pregnancy.  Restoring proper nerve supply to reproductive organs has helped many couples who thought they were infertile --- there are specific spots in the spine that can be adjusted to aid both men and women in this regard.

Once pregnancy occurs and you begin gaining weight, with it placed mainly in the abdomen, it exerts a downward and forward pull on the lower spine.  This extra weight, combined with changes in your gait and center of gravity, can set the stage for backache and neck pain.  Additionally, your body secretes a hormone called relaxin, which loosens ligaments.  This loosening may exaggerate the effects of an existing spinal or pelvic problem.  The positioning of the baby and its movement, as well as expansion of the lower part of the ribcage to accommodate your growing baby, can also cause discomfort in the ribs and upper portion of the lower back.  And your increasing breast size, in preparation for lactation, can also create upper back subluxations. 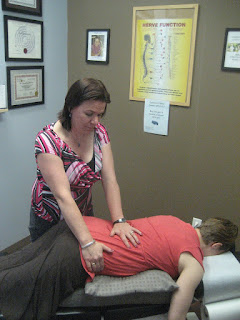 
Adjusting women throughout pregnancy equates to a healthier pregnancy --- meaning an easier labor and delivery, and a better transition for the baby into this life.  Without attention, any misalignment of the pelvic outlet could be a cause of slower descent of the fetus through the birth canal during labor.  And any existing back pain could also decrease the mother's range of motion, making it harder for her to assume the upright, active positions that have been proven to make labor more efficient.

One of the biggest benefits to regular chiropractic care during pregnancy is that a properly balanced and open pelvis allows more room for the fetus to turn into a proper position.  In fact, many chiropractors have additional, specialized training in a technique to encourage a breech baby to turn, called the Webster's technique.  (The technique is designed to work with the body to normalize the bony and soft tissue structures of the pelvis so the baby CAN go head down. It is non-invasive and does not involve physically manipulating the baby at all.) According to the Journal of Manipulative and Physiological Therapeutics there is an 82% success rate in turning breach babies using the Webster's technique.  Another study showed that regular chiropractic care also reduces the chances of the baby being posterior (this position is known to create the most painful labor conditions).  Having the best fetal positioning possible allows the mother's body to do less work in labor and during the pushing stage because she is not having to help the baby change positions in order to fit.

If you are interested in seeing an adjustment done on a pregnant women, here is a very nice you tube video showing the Webster's technique.

Therefore, the adjustments made during pregnancy can be a tremendous aid during labor and delivery.  In one study, women receiving chiropractic care through their first pregnancy had 24% reduction in labor times, as compared to those who did not receive such care.  And subjects giving birth for the second or third time reported 39% reduction in labor times, as compared to their previous labor(s).  In a hospital study, the need for pain medication was reduced by 50% in the patients who received adjustments.


Pelvic bone adjustments can also be used to encourage past-due or non-progressive labors that are stalled due to pelvic outlet disproportion.


Chiropractic care has also been shown to reduce the likelihood of postpartum depression, since it balances the nervous system by removing subluxations of the spine. 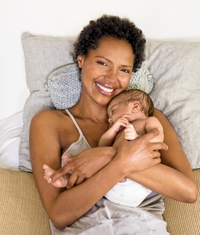 So, if you ask me, seeing a chiropractor is an invaluable tool!

When looking for a chiropractor, talk with them ensure that they are experienced in working with pregnant women.

While receiving any spinal and pelvic adjustments will aid the body in being balanced and achieving better pregnancy results, it would actually be best if you can find a chiropractor who is more than experienced in pregnancy, but one who actually specializes in working with pregnant women, as they will have more skills and techniques useful for ensuring the baby is in the proper position.

I would suggest asking your provider if they have a chiropractor that they would refer you to, in case they do have any excellent connections.  If not, local doulas can be great resources for finding such care.  (Even if you are not using the doula yourself, they usually are more than willing to share such information with you.)  Or ask around mommy circles to see if you can find any positive feedback on anyone.

Its worth searching out! It can make a huge difference!


* Click here for more of my healthy pregnancy tips


(Update 7/18/12: After seeing a Prenatal Chiropractor through the last half of my pregnancy and employing other helpful tips, I did go on to have a safe and healthy, all natural VBAC.
My experience was awesome. I think a major reason why was my chiropractic care, I'm not sure I would have had a VBAC without it.  My baby was in a great position, helping my baby press down on my cervix, allowing my labor to start naturally.  My VBAC labor was only 6 hours. (My previous labor had been an induction that lasted12 hours, before the c-section.) My contractions were very manageable. And I only pushed for 20 mins (mostly mother-led light pushes), which was worlds apart from my first birth during which I pushed with all my might for two hours, having no progress and ending in a c-section.  You can read my VBAC birth story here.)

Cited Studies:
Dr Joan Fallon found the reduction of labor times:
Fallon, J. The effect of chiropractic treatment on pregnancy and labor: A comprehensive Study. Proceedings of the World Federation of Chiropractic. 1991: 24:31.

A study conducted by lrvin Henderson, MD, a member of the AMA Board of Trustees concluded that women who received chiropractic care during their third trimester of pregnancy were able to carry and deliver with more comfort:
Henderson I. American Medical Association records released in 1987 during trial in U.S. District Court Northern Illinois Eastern Division, No. 76 C 3777, May, 1987

Dr. Per Freitag, MD, a well known orthopedist, conducted a hospital study that incorporated chiropractic adjustments during the patients' pregnancies. The study concluded that the need of the chiropractic patients for pain killers during delivery was reduced by half:
Freitag P. Expert Testimony of P. Freitag MD PhD comparing the results of two neighboring hospitals, U.S. District Court Northern Illinios Eastern Division, No. 76 C 3777 May 1987

Reduction of back labor study:

Email ThisBlogThis!Share to TwitterShare to FacebookShare to Pinterest
Posted in: Healthy Pregnancy