Helping the Baby Engage at The End of Pregnancy

...Solving the mystery of why I didn't go into labor on my own last time.

When I was at the end of my first pregnancy I had the general idea that when the baby engages, it's getting close to "go-time."  But I didn't have much more knowledge or insight into the whole ordeal.

Your baby's  head is technically engaged when the widest diameter of the  head passes through the brim of your pelvis.

How far the baby reaches down into the pelvis is measured in stations. 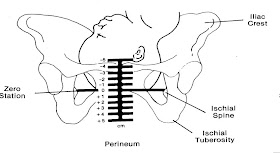 Descent assessed by abdominal palpation:  Refers to the part of the head (divided into 5 parts) palpable above the symphysis pubis; recorded as a circle (O) at every vaginal examination.  At 0/5, the sinciput (S) is at the level of the symphysis pubis.

What did that just say? 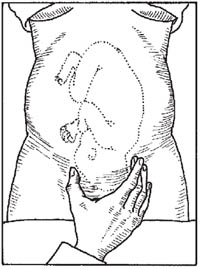 When looking up these photos I found this general description of engagement on a doctor-y website:

"Engagement is a common phenomenon at the end of the first pregnancy (36 weeks on) and is a positive sign that labor could start soon.  Your baby's head does not need to be engaged for you to go into labor.  For the majority of women this is the case --- the baby's head is not engaged in the pelvis.  If the fetal head remains very high at term then it is a concerning sign that the baby may not fit easily through the birth canal during labor, which could mean a more difficult and prolonged labor or else even an obstructed labor, resulting in a Cesarean section.  Close application of the fetal head to the cervix will help the cervix to ripen for the onset of labor.  Alternatively if the fetal head is very high and not well applied to the cervix then it is more likely for a woman to go overdue and have an unfavorable cervix."

The above statements make it sound like a baby's head may or may not engage, and there's not a lot anyone has to say about it.  And if it doesn't, well, the doctors are likely going to need to step in and take over.

The funny thing is, I find this entire description to be contradictory to itself.  It says the baby's head does not need to be engaged to go into labor.  (Which IS true.)  BUT it goes on to say close application of the baby's head to the cervix will promote labor.  And if the baby's head stays high the mother is more likely to go overdue.  SO... it sounds like engagement is ideal for starting labor, perhaps necessary for some mothers to go into labor naturally.  And it also says labor will likely be more difficult if the baby stays up high.

So it sounds like getting the baby to engage is pretty important.

And this idea, is what I've been told in my second pregnancy.  As I've written before, my provider has told me she thinks I went overdue and was induced because my first baby was always in a awkward position and therefore never engaged.  So with her not pushing my cervix, there was nothing to promote my labor.

My current care team's goal is actually to get this baby engaged (maybe not to zero station, but definitely down well into the pelvis) by 37 weeks!  Most literature that I've read says that after the first baby, subsequent babies usually don't engage until labor.  But yes, my care team is aware that it's my second pregnancy.  (And, even though I had a c-section, I fully dilated and pushed so I do count as a second time mom in terms of laboring.)  They just see engagement as a very good goal to achieve at the end of any pregnancy.  And I'd have to say I agree with them and am very excited about the prospect of the entire principle.

For someone like me (who last time had an unengaged "floating" baby, causing me to go overdue to 42 weeks so that I was induced, which ended in a c-section), having the ability to help the baby do this, feels sooooo much better than just waiting around.

So I've been given some very helpful tips that are very useful in encouraging the baby to engage.

What can you do to help your baby engage?


1: The first thing I was told was to see a Chiropractor.


Here's why:
I was told there has been a lot of success for moms-to-be to help correct any pelvic and spinal alignment problems, allowing the baby to settle into the right position which will equate to engagement, which in turn will promote labor.
(I was told the most likely reason I didn't go into labor last time was that my daughter was always malpositioned so that she couldn't press down on my cervix, and not having her press down was what held back the hormones which would be released to start labor.  And since she was malpositioned to start with, in our case, my baby wasn't able to correct it during our labor, which is what necessitated our c-section.)


2: My prenatal chiropractor told me that putting on a maternity support belt after her adjustments will aid in getting the baby to engage.  And my caregiver agrees.  They both say wearing one is especially helpful in cases where a baby might otherwise engage and disengage during the end of pregnancy.


Here's why:
Lifting the lower abdomen with a pregnancy belt can support the slope of the uterus and help the baby get into a better position and slip behind the pubic bone, instead of on top of it.
Loose ligaments are supported by wearing a pregnancy belt.  The baby can get angled in a way that gives them an advantage to improve fetal positioning.  A pregnancy belt may help the looseness that makes it hard for the baby to have a toned slope to settle head down on.

3: The last thing I was told by both sources was to spend time on your hands and knees. (Don't wear your maternity support belt during this time. Let your belly hang freely.)  During this time do pelvic tilts, as well as any butt wiggling in general --- hip circles, figure eight movements --- anything that swings your hips.  My chiropractor says at least 20 minutes a day.  My caregiver says as much as possible.  (So I'm assuming she'd love even longer than 20 minutes a day.)


Here's why:
Being on hands-and-knees opens the pelvis by 2 cm.  That, mixed with gravity pulling on the baby's heaviest parts, allows the baby the more space and opportunity to scoot down in the the pelvis.  The longer you are on your hands and knees, the more time you are giving the baby to do its job.


4: It's also a good idea to stay very hydrated.  My chiropractor suggests drinking a gallon of water per day!
Here's why:
Staying hydrated ensures your baby the best chance at having a good amount of amniotic fluid, which will allow he or she the freedom to move around in your womb with the most ease.

*Click here for more of my healthy pregnancy tips!